Apartheid “township” across from upmarket Sandton.

A name used by the Apartheid government to describe a black area under the group area act.

The best way to experience an Alexandra tour is with Ekala’s passion for Johannesburg as a whole, in addition to the township of Alexandra.

Where time is short – with the main focus on Johannesburg – we may additionally be able to include a drive-through Alexandra township (Johannesburg’s second township).

Thus giving a greater perspective of the full Johannesburg.

Our tours are fully guided and private (not mixed groups). Accordingly, each Alexandra tour can be uniquely designed for an individual experience.

If you have only one day available or part thereof for an Alexandra township tour, we structure the tour around key sites.

While around your time available and the time allocated to Alexandra.

Additionally, we use our experience in Alexandra/Johannesburg to create suitable day tours.

Subsequently including the most significant items in Alexandra. Furthermore, making the best use of available time in the day.

Giving our clients the best possible understanding of the Alexandra Township, both culturally and historically.

Where time is short – with the main focus on a Johannesburg tour – we can include a drive through Alexandra.

Simply to give a perspective of the full Johannesburg. Including the larger township of Soweto.

Accordingly, the more time that can be applied, the better the history/culture of Alexandra that can be covered within the tour.

On cultural/historical Alexandra day tours, we would generally not go into Museums. Unless specifically required.

Ekala offer day/multi tours that would include Alexandra and Soweto, the townships of Johannesburg.

For the purpose of structuring an Alexandra tour around your requirements and time available – Ekala needs to be supplied with clear timing, collection and drop off address – hotel name.

Additionally, if one of the points is the airport – we need full flight details.

Once we have these it will be possible to quote/advise and structure a day or multi day Alexandra tour package around your requirements/timing.

Thus, day tours structured around your requirements and timing.

Alexandra Township Tours can include:

However, shortcomings of the system created social problems within the community and encouraged prostitution. Destroying family structure.

Nelson Mandela room. One-roomed house, located down a narrow alleyway, flanked by houses. Leads to a room used by Nelson Mandela as a young lawyer during the 1940’s.

Before moving into this house, Nelson Mandela stayed at the Alexandra Anglican Church, one street away.

Final resting place for many apartheid era political activists. The cemetery offers a view over Alexandra, the Jukskei River and east bank developments.

Tsutsumani Village. Housing development opened in 1999 for use as an Athletic village during All-Africa Games.

Items included within the Alexandra township tour does depend if on a walking tour or a drive-through and the overall time allocated.

Alexandra tour coverage depends on the time allocated and other inclusions on the day.

Also, if driving or being supplied as a walking tour.

Alexandra walking tour through the streets of Alexandra. Visit historical sites. Meet the people of Alexandra (without being invasive).

Exciting, Eco-friendly township tour around the streets of Alexandra.

Walk to some of the most interesting historical sites around Alexandra. Thus an up close and personal experience of the Alexandra community and get to know what makes this township unique.

However, as these walking tours are private day tours, these items above can be tailor made to your personal requirements.

Alexandra Township walking tours are not always available. Depends on the size of your group, time available and various other items.

Accordingly, these must be specifically requested and confirmed in your booking.

Where time is short: With the main focus on a Johannesburg tour – we can include a drive through Alexandra.

Simply to give a perspective of the full Johannesburg. Including the larger township of Soweto and denser Alexandra.

What Ekala has found to be most successful in Alexandra, is to use an Alexandra taxi to move you around from area to area within Alexandra.

Then to cover that part of Alexandra on foot. This then is supplied with an Alex Taxi plus a local Alex resident. Then also Ekala’s guide.

Thus, if you have walking problems – easy – we increase the time in taxi and reduce the walking time.

We can include a drive through Alexandra in most Johannesburg tours.

But does depend on collection and drop off point and actual time available in the day. Additional and dependent to other items to be included within tour.

Will actually respond within 24 hours. In most cases less. However, does depend on time differences.

A cell phone does create some problems. Due to time difference or that, we may all be on tour and thus unable to answer your call at that time. Thus, email works perfectly.

Additionally, difficult to deal with private tour specifics on a cell phone.

Ekala’s guides are well-spoken and additionally providing interesting detail and clarity while on the Alexandra township tour.

With the active engagement between guide and guest is encouraged.

​Heritage sites and historical buildings hold the memories and unique stories of days gone by.

Experience the township vibe in Alexandra

Alexandra was proclaimed a township in 1912 and soon became known as the “dark city”. Due to the complete absence of electricity.

The Alexandra health committee was set up in 1916 with the aim of improving conditions in Alexandra.

However this and all subsequent attempts to improve living conditions in the area have in general failed.

Originally a half square kilometer in size. Today Alexandra is 7.6 square kilometers. Including the areas of the East Bank, West Bank and Tsutsumani. With an estimated population of over 600 000 residents.

Alexandra – vibrant township. In stark contrast to its upmarket neighbor of Sandton.

Johannesburg’s financial centre, only 10 minutes away.

The farm originally owned by Mr Papenfus. Named after his wife – Alexandra. The area was originally proclaimed as a white area in 1905.

However, in 1912 stands of approximately 1000m2 were made available to Black and “Coloured” South Africans.

Alexandra was therefore one of only a few urban sites in South Africa that black South Africans could acquire property rights. 1916 saw the development of the Alexandra Health Committee. However, was completely ineffective due to a lack of funds.

Alexandra became known as the “Dark City” with no electricity or street lighting. The government’s lack of interest to develop the township saw conditions deteriorate within Alexandra, and disease a constant threat.

Furthermore, aggravated by the fact that Alexandra fell outside the Johannesburg City boundaries at that time.

During the Second World War, the government considered demolishing Alexandra. However, this did not come about. In 1958 Alexandra was placed under the then Apartheid West Rand Administration Board (WRAB).

Choosing rather to develop a dormitory-style hostel suburb. Accordingly, resulting in mass forced removals away from Alexandra to facilitate this development.

Most of these forced removals saw residents of Alexandra moved to Soweto, mainly Diepkloof and Diep Meadow. This subsequently reduced the population of Alexandra from 75 000 residents to 40 000 by 1973.

Furthermore, a 3-month Bus Boycott of the Mid-1950s showed the spirit of the Alexandra people. Township people choosing rather to walk than pay increased bus fares.

During the late 1950s and early ’60s, the people of Alexandra were intimidated by the Msomi Gang, a mafia-style gang that ruled Alexandra.

Besides all of this, the people of Alexandra Township have managed to endure and flourish.

Ideal tour options to be included in the Alexandra Township tour to create a full day tour:

However, as an addition to an Alexandra tour – would only be a drive-through – unless an extra day was to be allocated.

Freedom tour-walk in the footsteps of Nelson Mandela (shortened)

For multi-day options including the Alexandra township tour

Cradle of Humankind Tour from Johannesburg

Get out of the city for a true safari 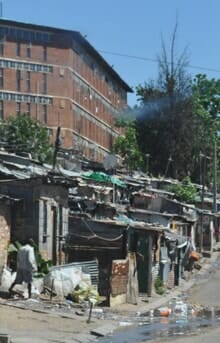 As a result, we do NOT go into private houses.

Above all, not to invade the Alexandra township resident’s privacy in any way.

No tour prices on our website because of unique, individual and specialised requirements for each Alexandra tour we supply.

Consequently, if time is limited:

And so we structure the Alexandra tour from arrival to departure – including airport collection and drop off.

As a result, Alexandra tour quote based on your specific requirements.

Consequently, an Alexandra historical/cultural day tour to remember for the right reason

Then all time spent in prison up to the point of sentencing in the Rivonia trial – in Johannesburg and Pretoria.

Accordingly, spent the last 23 years of his life in Johannesburg (apart from a short time in Qunu).

Consequently, if you wish to WALK in the footsteps of Nelson Mandela, and truly experience his life, it needs to be in Johannesburg and Pretoria.

Let Ekala Eco Tours provide the gateway to your discovery of South Africa.

And so come with us and experience the rhythm of the vibrant Alexandra township.

Ekala’s Alexandra township tours can thus be adapted to the client’s individual needs.

Consequently, take into account the special needs of visitors and personal needs.

Private collection and drop off – then supplied as a fully guided professional Alexandra tour.

Covering en-route as may be additionally possible from collection to drop off. As a result, not simply a point to point transfer with a driver.